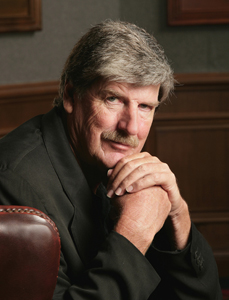 Mike Ponders unmistakable art and writing styles continue to earn him both national and international success.

Raised in Lower Hutt, New Zealand, and educated at Hutt valley High School where he first discovered he had a talent for art. However it was not until he was in his early thirties that he took up painting professionally.

Mike was a founding member of the very successful ‘5 Artists’ group and has assisted and encouraged new artists through tutoring night classes and weekend schools. Mike believes that his unique and individual style is due to being self taught. His paintings are bold, full of texture and colour, sometimes delicate with amazing detail and always with a touch of red – they are painted with knives only.

Mike has produced three books of his art. The first, ‘Textured Colour’ has sold out. Copies of his later books, ‘My Way – A Touch of Red’ and ‘Oil on Canvas’ are still available. They show some of the best examples of his recent work in both oils and water colours.

Following the sale of Ponder Estate in 2002 Mike wrote his first novel, ‘The Windsor Conspiracy’ Published in 2007 it became a best seller and is sold internationally. The sequel ‘Four Kings’ was released in Dec 2012. His latest book, 'For Queen and Empire,' the third in the trilogy has just been released and is now available.

Forestry, wine and olive oil have also played an important role in Mikes career. For over forty years he has had forestry interests, and as a member of the NZ Forestry Council he championed the cause of the small scale forest owner. In 1987 Di and Mike Ponder purchased 35 ha of land on the outskirts of Blenheim and planted their first olives and grapes the following year. They developed an international reputation for their Ponder Estate Wines, and were pioneers in the development of New Zealand’s olive oil industry. Mike’s experiences and knowledge of growing olives and making olive oil are well documented in his best selling ‘The Good Oil – growing olives in NZ’. Limited supplies are still available.

Mike and Di have now retired to Blenheim where he divides his time between painting and writing. His latest paintings are posted on his website, as are his art cards, prints and hand finished Giclees which can also be viewed at The Mike Ponder Gallery, 17 Francis Street Blenheim, New Zealand.